Zion, a rich teenage runaway, is looking for a place to belong. When he sees a group of boys cross the street, he drops everything and follows them, especially Uno, whose casual appeal stirs hidden feelings in Zion. It turns out the boys are hustlers. When the youngest dies of an overdose, Zion becomes entangled into their troubles. He joins a mission to fulfill the dead boy’s final wish: to go home. Over the course of one night, Zion and the rest take the dead body from the city to the countryside, to relatives and a former girlfriend, via buses and highways. With each step, the conclusion becomes clearer: that there is no place in the world for these kids, except with each other. When they arrive at the boy’s hometown, they are struck by his family’s apathy and rejection. They throw the body into a bonfire amidst the town’s noisy festivities, claiming him as their own. When morning arrives, despite their differences, they have become forged into a singular pack of brothers.

Since I moved to Manila five years ago, a sense of restlessness from being alone took over me. I started going out at night into unlikely cor- ners of the city. I started walking. Like my characters, I walk and walk hoping I arrive at a version of family and home I can envision. I met young men in the midst of their own walking, living, existing. Despite differences in age, class, sexuality, and roots, I forged fleeting but meaningful bonds with them. These encounters were a way to connect with myself. To walk Manila by night offers a revelatory peek into Filipino youth on the fringes of society. This road movie is an exploration and meditation on socio-political spaces. The camera will embody Zion’s self-discovery, to capture life-as-it-is for our invisible characters to be made visible. 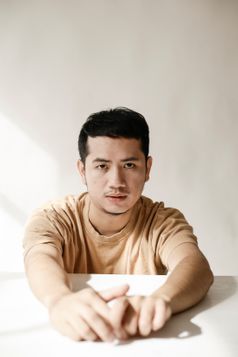